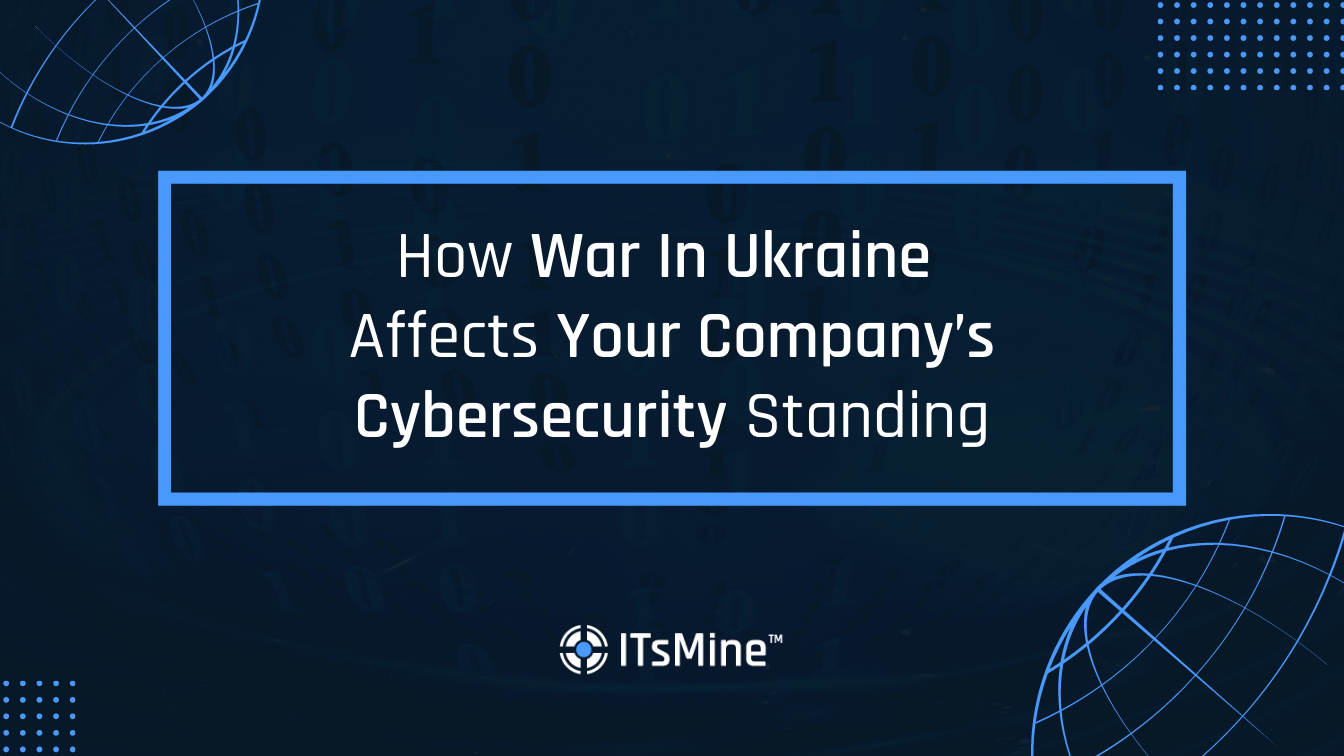 Many people have been personally and tragically affected by the current war in Ukraine. Many others have not, and more than once the question has been asked, “how will this affect me?”

The truth is, the effects are already being felt, on a very personal level, for everyone. Just one example is at the gas pump: global uncertainty around energy, along with other key factors, has driven up the price of filling your car to record numbers.

From a business perspective, the crisis in Ukraine has another major implication. It has changed the order of key risks facing businesses today.

It sharply raises the risk of cyber attack on your business – not only the chances of such an attack, but also the complexity, severity, and sophistication of an attack – to levels that in many cases can threaten your business itself.

How? Read on to find out.

How the war started – and why it matters

The current war didn’t start with tanks rolling across a border. It started with a massive cyber attack, allegedly state-sponsored, which crippled both government departments and private businesses.

This is how wars of the future are likely to start, so we just witnessed the dawn of a new reality.

This opening salvo set the trend: these attacks are continuing, from all sides of the conflict.

By now, everyone knows that military objectives are much easier to achieve if you can use cyber attacks to knock out key infrastructure, communications, and even internet access.

What do we learn from this? State actors have mobilized hordes of cyber warriors in furtherance of their cause, along with giving tacit encouragement to rogue elements who can cause panic and confusion among enemies and allies of enemies – with these elements sometimes just in it for financial gain, but benefitting from the shared goals of their sponsors.

That cyber attacks have increased is well documented: ratings agency Fitch notes that “Cyberattacks on businesses and government agencies have increased following the Russian invasion of Ukraine, with the risk of spillover cyberattacks against non-primary targets becoming much more widespread”.

It’s also been shown that, over the course of the conflict:

There are several key factors that make the cyber element of war so different to conventional warfare:

Conventional warfare is usually fought between neighboring states, or at least parties within close proximity to one another. A missile is launched from the territory of A into the territory of B, and vice versa.

An ally of one’s enemy, who is not directly taking part in the conflict – in this particular case think the U.S. – is generally left out of hostilities.

With cyberwarfare, this is not the case. The cyber warriors will actively go after allies of enemies, looking to weaken, to take advantage. The whole world becomes a battleground. No one is safe.

Ordinary U.S. businesses are directly in the crosshairs of today’s cyber soldiers.

2. There are no rules

There’s no Geneva convention, there’s not even commonly accepted practice. Everything goes when it comes to cyber warfare today.

This means that every element of critical infrastructure, every hospital, every business is fair game for these unscrupulous attackers – and this danger cannot be ignored.

3. There are no consequences

The metaphor that used to be used with cyber crime was robbing a bank; why risk your life going into an actual bank, when you can steal much more from behind a screen, millions of miles away, with little worry of being caught?!

So too with military operations. There are no consequences; no one is going to be caught, extradited, sentenced or imprisoned.

Cyber attackers, especially those that are stat-supported, therefore have carte blanche to attack wherever they please.

4. Huge resources are not required

And with the resources of a state behind them, ordinary businesses with basic cyber protection are no match for these units.

5. The scales are tipped in favor of the attacker

Following from the previous point, the attackers have everything stacked in their favor. They can afford to scan businesses, looking for weak points of entry, and trying again and again until they succeed.

What is success for them? It could be exfiltrating key information such as customer lists or technological know-how. It could be wreaking havoc with a ransomware attack. Or it could just be to get behind defenses and wait for an opportune moment to pounce at some point in the future.

ITsMine provides refuge to companies looking for a safe haven

Today’s reality is further complicated by the proliferation of “data everywhere.” Companies are predominantly cloud-based, employees are often working remotely and collaborating on documents, all of which makes it extremely challenging for CISOs and company IT to keep everyone protected.

ITsMine takes this reality into account when offering its Agentless BeyondDLP™ solution.

ITsMine provides safety and protection to your shared and distributed work environment, along with regulatory compliance.  ITsMine’s technology overcomes the major challenges and complexities of current data security solutions by automatically constructing data security “Safe Zones” for sharing and collaborating.

Beyond these Safe Zones, data is tracked and controlled to prevent intentional and unintentional misuse of your sensitive data, including that data getting into the hands of state-supported attackers.

How does it work? It’s all about ITsMine’s 3-layer solution:

With sensitive data safely protected in Safe Zones, the beating heart of your business is protected against even the most sophisticated attacks.

As you can see, only ITsMine can guarantee the protection of a company’s sensitive data against the most sophisticated attacks out there, including State-sponsored strikes.

With an expected massive increase in attacks, the order of the day is to increase protection with a product that can shield you from the worst that state-sponsored and state-supported attackers can muster.

Enabling you to continue with “business as usual,” despite the swirling global storms.

The war will end: the threat will not

One way or another, the current conflict in Ukraine will end. Does this mean the end of the cyber risk for companies? Absolutely not. There are some key long-lasting effects of this war: